The Time Zack Morris Framed Slater For A Hate Crime

September 27, 2019 By funnyadmin Comments are Disabled

The Time Zack Morris Framed Slater For A Hate Crime 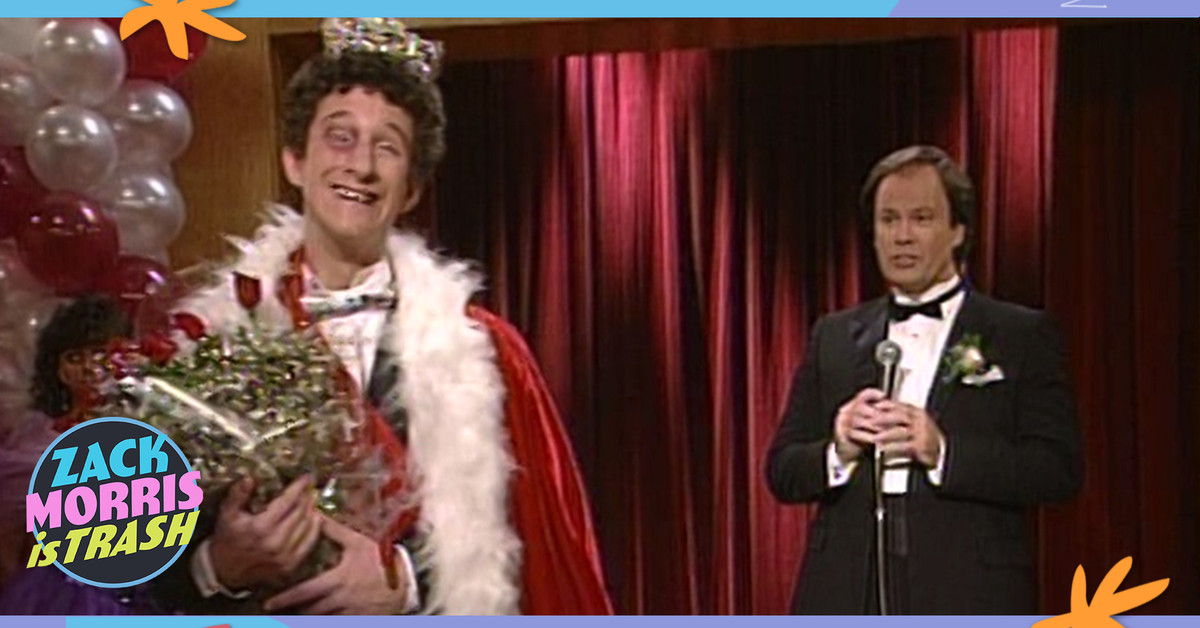 It’s the annual Miss Bayside Beauty Pageant! Zack’s cue to unsuccessfully start a “swimsuit” chant. The winner will compete for the totally real title of Miss High School California. Jessie accurately labels this a sexist waste of time. That’s why Zack loves it.

Kelly was going to enter, but Jessie persuaded her otherwise. Zack doesn’t miss a chance to call women dogs. (this is gonna be some beauty pageant woof woof)

He vows to make her regret that sound decision. Zack, a gambling addict, bets Slater fifty dollars he can make anyone beat Lisa. Slater picks Screech.

Instead of backing down from his uncalculated proposition, he tells Screech he’s going to be Miss Bayside! The rules don’t say he can’t! Something that’s never stopped Zack before.

Screech doesn’t want to enter, so Zack manipulates him with lies he’s a shoo-in. And a gender pioneer! When this is only about cash and vengeance.

Zack callously tells Lisa that Screech will destroy her. Then barges into Belding’s office to enter him. When Belding explains this contest is for women, Jessie articulates all the points Zack could not that it’s discrimination. Belding sees the error of his judgement, zero thanks to Zack.

Now Lisa’s upset her dream is being challenged. And Jessie feels the needs to enter to support Screech’s bravery. Which pushes Kelly to enter as she respects Jessie and follows her lead. Zack’s mad his fifty dollars are in jeopardy and doesn’t care that he pitted best friends against each other, seething with needless animosity.

Talent rehearsals are fine. Whatever. Screech does an impressive magic show. Slater enters, too! Because all his friends are in this thing. It’s not like he’s gonna eat fries by himself with that creep waiter at The Max.

Screech is devastated he’s up against all his pals. Zack set him up to fail for selfish gain as he does every day. While Zack does nothing to cheer him up, Screech’s robot Kevin inspires him but accidentally gives him a shiner in the process. This gives Zack a great idea.

At the pageant, Slater comes out to crickets as everyone believes he hospitalized Bayside’s first nonbinary trailblazer. Much to Zack’s delight. Screech gets a standing ovation predicated on blonde lies.

Screech uses his newfound platform of adoration to be selfless, a foreign concept to Zack, and says he won’t win state even if he wins today. He pleads not to vote for him for the good of Bayside. Zack calls him insane. (Don’t listen to him, he’s still on medication!)

Screech wins. But not because he is talented and kind and deserving. But because of Zack’s libelous fuckery. Slater, an honorable sport, tries to pay up. But Zack can’t take it because of his frame job. So everything was pointless.

Zack Morris, to seek revenge on Lisa for refusing his shady assistance, forced Screech to compete in a women’s’ pageant to win fifty dollars. And still needed Jessie to get him entered. After stoking bitter division among friends, framed Slater for a hate crime to turn an entire school against him. Then, when Screech, tried to do the right thing, branded him mentally ill. All for fifty dollars he didn’t take after crushing Lisa’s dream for free. Zack Morris is trash.