Trump, Having A Normal One, Tweeted A Photo Of Himself As Rocky Balboa

Trump, Having A Normal One, Tweeted A Photo Of Himself As Rocky Balboa 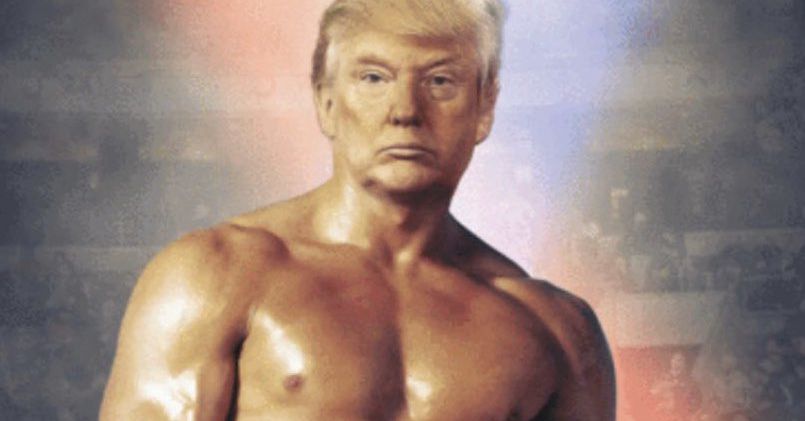 It’s the day before Thanksgiving, many people are now enjoying a delightfully short work week, others took the whole week off, in any case, folks all over this country are getting ready to eat their way into a food coma tomorrow. So I, like the rest of you, woke up this morning feeling nice and relaxed and ready for a leisurely, probably uneventful day.

I foolishly expected a normal day, I let my guard down, and while scrolling through my phone over a cup of coffee, Twitter delivered a swift roundhouse kick to my jaw, then grabbed me by the shirt collar, pulled me in close, and said, “Surprise, motherfucker, shit is gonna get so goddamn weird.”

Just before 8am PST / 11am EST, President Trump tweeted a photoshopped and deeply, deeply cursed image of his head on Sylvester Stallone’s body from the 1982 classic Rocky III, with absolutely no context.

Yeah, sit with that for a minute.

Trump managed to ruin literally everyone’s day, coast to coast, before noon. Subsequently, he also ruined Rocky III and effectively destroyed Thanksgiving, possibly even Christmas. Who knows if we’ll have healed as a nation by then.

Unsurprisingly, this confused the living hell out of (and thoroughly traumatized) everyone. Not that any caption could really explain this photo or make it hurt less, but by spewing it out into existence without so much as a word, he turned something that could have just been deeply upsetting, like waking up to a cat’s asshole in your face, into something that is deeply upsetting as well as ominous and vaguely threatening, like waking up to find someone slid a picture of a cat’s asshole under your door.

It’s bad either way, but one’s gonna be way harder to scrub from your psyche.

With a bit of digging that I did not want to do and am now worse off, in all ways, for having done, I learned that apparently this is in reference to a comment Trump made at a rally in Florida last night. His recent impromptu hospital visit sparked rumors that he perhaps had a heart attack, or at least some form of heart troubles.

Trump denied these rumors and explained that the doctors did give him a physical, but not to examine his heart, no no. Supposedly quoting the doctors, Trump said, out loud, with his mouth, into a microphone,

“Show us that gorgeous chest. We want to see it. We’ve never seen a chest quite like it.”

Yes. Trump, the man with the launch codes, did say he has a “gorgeous chest” and then tweeted a picture of himself as Rocky Balboa to prove it. It did not prove anything, but we all had to suffer through it anyway. If anyone needs me, I’m going to go sit in a dark room and stare at a blank wall, contemplating death.