June 10, 2019 By funnyadmin Comments are Disabled 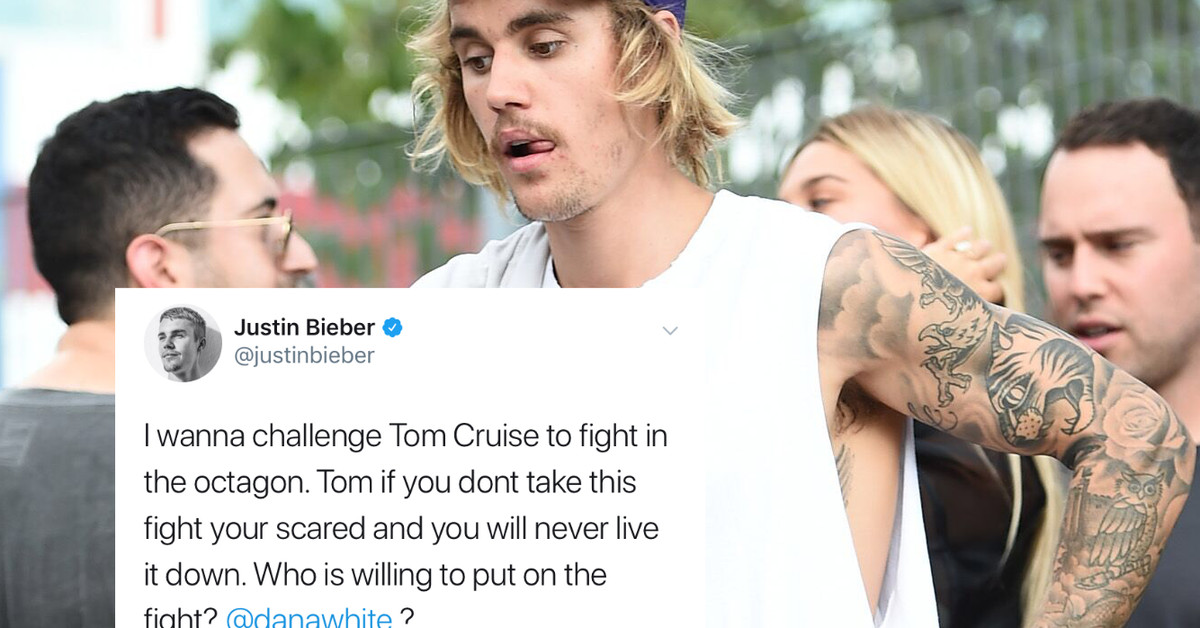 We’re somehow already halfway through 2019 and it’s been a weird, weird year, guys. It’s getting to the point where, honestly, things don’t even faze me anymore. People petitioned for Danny DeVito to play Wolverine in the next X-Men movie? Sure, why not. Some lady in Florida just casually had an alligator stuffed into her yoga pants? Hey man everybody’s gotta keep their alligators somewhere.

Every so often, though, something will happen that’s out of left field enough to make me go, “what the hell is going on?”

I spent the weekend away from Twitter because it was beautiful out and it’s good to unplug for a bit, so when I came into work this morning I poured a coffee and started to catch up on what I had missed over the last couple days.

Literally not even two sips into my coffee I learned that Justin Bieber said he wants to fight Tom Cruise.

I wanna challenge Tom Cruise to fight in the octagon. Tom if you dont take this fight your scared and you will never live it down. Who is willing to put on the fight? @danawhite ?

Objectively speaking if anyone was just gonna decide they wanted to fight a celebrity, Tom Cruise isn’t the worst choice. Sure, he’s a great actor who admirably does his own stunts, but he’s also a batshit crazy Scientologist and as we all know Scientologists are literally the worst. So if I overheard anyone say “I wanna fight Tom Cruise” I’d probably nod like, “okay, fair enough.”

But I also had one glaring question that I’m sure anyone else who saw this tweet wondered to themselves.

What did Tom Cruise do to Justin Bieber

To which the answer is an emphatic,

who the fuck knows.

So, that’s it. That’s the story. Justin Bieber wants to fight Tom Cruise and essentially called him a chicken if he doesn’t. Tom Cruise has yet to respond. I don’t even know if Scientology permits accepting challenges, via Twitter or otherwise. Maybe they’ll duke it out, maybe they won’t. I don’t know, I just want to drink my coffee in peace. Happy Monday.

At some point tonight Tom Cruise’s agent will have to call Tom Cruise and tell him that Justin Bieber has challenged him to a fight, this is an actual conversation that will happen https://t.co/D4H9tG27cP

Justin Bieber challenged Tom Cruise to a fight. Justin Bieber is like “teenager, drive drunk” crazy. Tom Cruise is “scientologist, three divorces, scare Oprah” crazy. My prediction? Tom beats Justin to death with his golden globes in the 1st round and gives all praise to Xenu.

Am I dreaming or did Justin Bieber acc just call out Tom Cruise to fight him? The simulation is glitching harddd