July 12, 2019 By funnyadmin Comments are Disabled 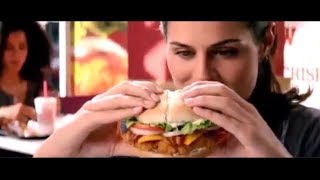 I put together ten funny commercials for burgers – well, one for smoothies – that I really liked and enjoyed. There are some from Burger King, Carl’s Jr. and Hardee’s, McDonald’s, Chicken Licken and, as always at the end, some famous surprises, in this case from Wendy’s.

These ads are included:

2. Burger King, “Exciting things are happening at Burger King” with David Beckham from 2012

3. Carl’s Jr. and Hardee’s, “The most American thing ever” with all-american model Samantha Hoopes in a hot tub, in a pickup truck, on an aircraft carrier with Lady Liberty and the most American thickburger with a hot dog and potato chips from 2015

8. Chicken Licken, “The little burger with the little price” starring Verner Troyer introducing the Slyder Burger, the most awesome small burger in the world

9. Carl’s Jr. and Hardee’s, “Are you crying?” (Jalapeño Chicken Sandwich)